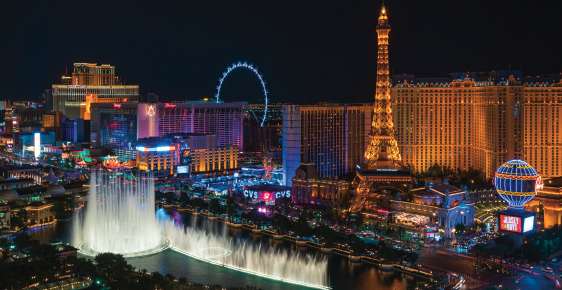 Although not on Route 66, Las Vegas, Nevada, is a quick, two-hour drive from Kingman, Arizona and a “must-see” city for those traveling the Mother Road. Many people took this detour to visit “Sin City,” where they viewed the lights, the sites, and even played a slot machine or two. Here are some little-known, fun facts about Las Vegas:

1. Las Vegas Strip: The “strip” really is not in Las Vegas. Most of the 4.2 miles of the famous Las Vegas Strip that includes Las Vegas hotels such as MGM Grand, Caesars Palace, and Wynn Las Vegas are actually located in the unincorporated neighboring town of Paradise.

2. Hotel Rooms: There are, at last count, 150,000 hotel rooms in Las Vegas. It would take 288 years for one person to spend one night in every room in Las Vegas. In addition, 15 of the world’s top 25 hotels are located in Las Vegas.

3. The Bronze Lion: Sitting atop the MGM Grand Hotel, this 50-ton landmark is the largest bronze sculpture in the country.

4. Stratosphere: At 1,149 feet, the Stratosphere Las Vegas is the tallest freestanding observation tower in the nation.

5. Luxor Las Vegas: The Luxor’s recreation of the Great Sphinx of Giza is 101 feet high and larger than the original. In addition, the Luxor’s electric bill for just the light at the top of the pyramid is $51 per hour!

6. The Brightest Place on Earth: Looking down from outer space, the Las Vegas Strip is the brightest place seen from Earth.

8. Shrimp Consumption: Visitors and locals consume over 60,000 pounds of shrimp per day in Las Vegas, which is higher than the rest of the nation combined.

11. Greywater: Structures in Las Vegas, such as fountains and man-made lakes, use greywater to fill them. Greywater is water recycled from sinks, showers, and bathtubs.

12. Wedding Destination: Over 300 weddings per day are held in Las Vegas, making it the top wedding destination in the U.S. and second only to Istanbul for the most number of weddings held in a single day.

14. Welcome to Las Vegas Sign: This famous sign features a white circle around each letter of the word “welcome” which portray silver dollars. This was purposely done because Nevada is known as the silver state. The design of this iconic sign was never copyrighted.

It’s a good time to make a plan.

Fill out this form to receive an informational brochure including a Complimentary Retirement Living Guide.