Pickleball Serves Up Health Benefits and Friendships at Morningside 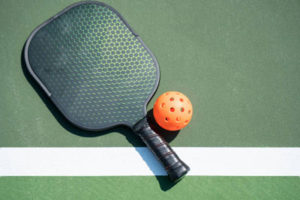 As the sun begins to rise, a group of Morningside residents grab their paddles and head out to the pickleball court located in the community. For nearly two hours, the residents practice their backswings and drop spins against their competitors. For many of them, like resident Fran Chin, it’s a game they picked up after moving into the community.

“I never played pickleball or tennis before moving to Morningside,” said Chin. “One day I saw some of my neighbors playing, and I thought to myself, ‘That looks like fun.’ Nearly two years later, I find myself playing twice a week.”

Pickleball has been growing in popularity across the country, especially with the senior population. Nearly 43% of pickleball’s core players are ages 65 and above. The sport is like tennis but has many advantages for seniors, including a smaller court and lower net.

Morningside built its pickleball court in spring 2017, and it’s the only one in the Fullerton area. Dozens of residents, who range from their early 70s to nearly 90, and team members regularly use the court.

The social aspect is also easy to see, as the Morningside of Fullerton court is filled with players laughing and talking as they play the game. Most recently, residents have been competing against one of the fitness instructors. Each of them learns from one another while they’re having fun and getting fit.

“Morningside offers so many great programs,” noted Chin. “I’m involved in Zumba, Pilates, and yoga. There’s an activity for anyone.”

No matter what exercise you prefer, getting up and moving is the most important thing you can do to improve your health. Regular workouts can increase bone density, reduce your risk of falls and cardiovascular issues, cut down the risk of dementia, and alleviate symptoms of diseases like arthritis and diabetes.